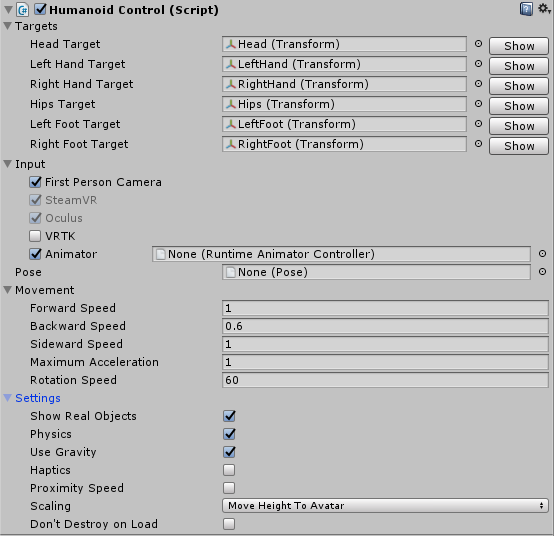 Targets are used to move the body. The control of an avatar is split into six body parts: head, 2 arms, torso and 2 legs. Each body part is controlled by a target: Head, Left/Right Hand, Hips and Left/Right Foot. Targets are not shown in the hierarchy by default but can be made visible by clicking on the Show button for that target.

Instead of the normal targets, you can also use custom target by replacing the default targets with references to other transforms. A good example are hands which are connected to a steering wheel. In this example two empty GameObjects are set at the right locations of the steering wheel. The Left and Right Hand Target show then point to the Transforms of these empty GameObjects.

Every target will have Target script attached which give additional control over these targets:

Adds a camera at the eye position of the avatar. If virtual reality has been enabled, this will also enable head tracking for VR headsets.

This will set the base pose of the avatar. For more information see Pose.

For networking setups, a remote avatar has to be selected which is used for the representation of the avatar on remote clients. This enables you to optimise the avatar mesh between first and third person views of the same avatar.

This sets a number of parameters for the locomotion of the avatar: