InstantVR Advanced or Edge version 3.0 or higher is required.

InstantVR Advanced or Edge version 3.3. or higher is required for non-HMD mounted placement.

Leap Motion is supported in Humanoid Control Plus and Pro.

Unity version 5.5 or higher is required.

The script IVR_Leap should be added to the character’s GameObject. Make sure the IVR_Leap script is listed higher than any IVR_Traditional or IVR_Animator script.

The Tracker Position is not used for Leap Motion when it is mounted on the HMD. In other cases, the real world position of the Leap Motion sensor can be set in the IVR_Leap script. The position is relative to the player’s position. If the sensor is 1 meter in front of you at a height of 0.8 meter from the ground, the Tracker Position should be set to x = 0, y = 0.8, z = 1. The rotation of the sensor can be set with the Tracker Rotation parameter. You can visualize the tracker position by enabling the Show Tracker option. 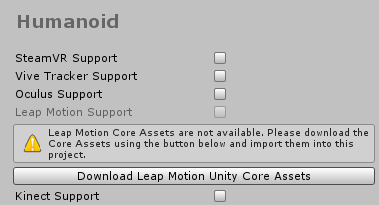 After the assets have been imported, Leap Motion Support can be enabled in the preferences.

Disabling Leap Motion support ensures that no code related to Leap Motion is included in the build.

To enable tracking with the Leap Motion for an avatar, Leap Motion needs to be enabled in the Humanoid Control component.

The Leap Motion (Transform) can be used to set the position of the tracking relative to the player in the scene.

Hands are fully tracked (positional and rotational) while the hands are in the tracking range of the Leap Motion.

Full hand movements are supported with bending values for each finger individually while the hands are in the tracking range of the Leap Motion.