InstantVR: no more virtual reality without an avatar 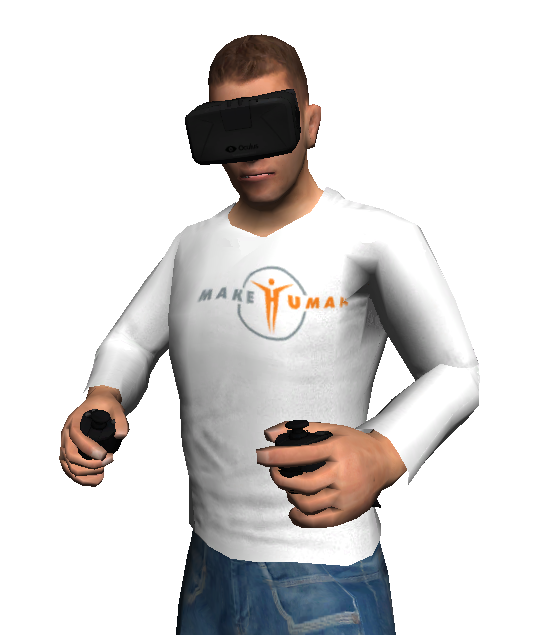 Very few games will give you a body in virtual reality because it is so hard to make. Instant VR solves this issue and gives every VR developer easy access to fully animated avatars.

Animating avatars is hard. It requires a lot of mathematics to do the inverse kinematics. Then you have the challenge that most players do not have a full body tracking suite like PrioVR or Perception Neuron. This implies that a lot of body movements are not tracked directly. Finally you have to deal with the fact that players may have different controllers: Xbox 360, Razer Hydra, Kinect, Rift DK1, DK2.

In the past year, Instant VR has been developed to help developers with those issues. It builds upon the advanced kinematics offered by the VR Body Movements package released earlier this year by Passer VR. This ensures that the avatar body can be animated in a natural way by moving and rotating up to 6 targets.

Version 2 of Instant VR includes an important improvement. In standing situations, the player is likely to move away from the starting position. This is called physical drift and many Razer Hydra owners will recognize the need to recalibrate often to compensate for this. In combination with the Oculus Rift DK2 this is corrected automatically. Actually, it even gives the player to physically walk around. However this is not recommended because of the attached wires and the risk of running into physical objects.

Instant VR comes with two avatars based on the standard MakeHuman avatars: one with 54 bones which gives more realistic movements while the other gives better performance with a reduced number of 36 bones. Of course you can easily replace the avatar by your own as can be seen in the following video:

In order to support as many players as possible, Instant VR offers a wide range of controller options. The software automatically detects which controllers are available and chooses the best combination. In version 2 it supports the Oculus Rift DK1 & DK2, Xbox 360 controller, Microsoft Kinect and Razer Hydra. But the player can still play the game when none of these are available: it will fall back to standard mouse/keyboard with 2D screen in that case including animated hands which are able to grab objects.

But apart from the default walking avatar, Instant VR also gives access to many other setups. Instead of driving the avatar targets by controllers directly you can also place them on objects like a steering wheel or move them by scripting. The following video is a perfect example:

Instant VR offers a complete and advanced solution for avatar control. Just drag on of the Instant VR prefabs into the scene and you will have instant virtual reality support.

There are two Instant VR packages: the free version supports the Oculus Rift and is mainly targeted at walking experiences. It gives a good impression of the ease of use of Instant VR. The advanced version adds Kinect and Hydra support, includes the full body movements and interactive hands and will provide everything a developer needs to create wonderful virtual reality experiences including the avatar body.